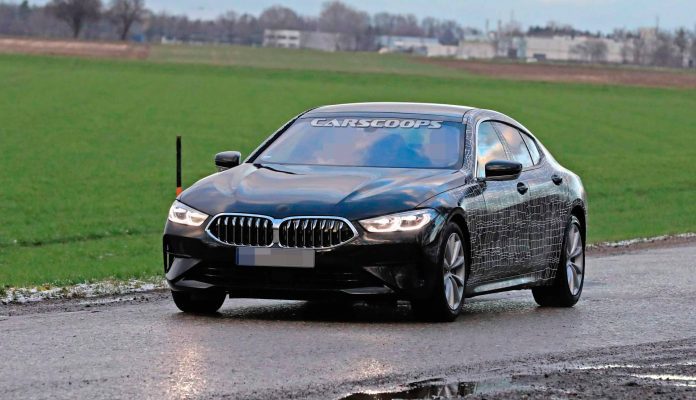 The current generation BMW 8 Series will have more models than ever.

In addition to the already presented Coupe (G14) and Cabrio (G15) models, we will also see the Gran Coupe (G16). All the models will get the M8 top version. The spy photos of the four-door compartment model already appeared, but now the cars is much more revealed.

In the previous photos, the car was almost completely hidden behind the camouflage.

BMW 8 Series Gran Coupe will not differ from its two-door brothers in a design aspect. The pictures, however, show that this is not the case. Headlamps are identical, but the bumper has a different design with a much longer grille.

The rest of the car remains hidden, but the contours of the body are visible. The muscular rear pillars and the carved trunk lid are the most obvious touches in the passenger compartment. As for the interior, expect it to offer more space for passengers thanks to the larger length of the two-door cab.

Facing the Porsche Panamera and the Mercedes-AMG GT 4-Door, along with other models, the BMW 8-Series Gran Coupe will share the same drives with the rest of their family. We expect to see the M850i ​​xDrive and the 840d xDrive with 4.4-liter twin-turbo V8 with 523 hp and a 3.0-liter turbo diesel engine, a 6-cylinder engine with 315 hp.

Later, the M8 will come with a 4.4-liter V8 engine with more than 592 hp coupled with an 8-speed automatic transmission and an M xDrive AWD system with 2WD mode. The BMW 8-Series Gran Coupe will debut next year as a model for 2020.