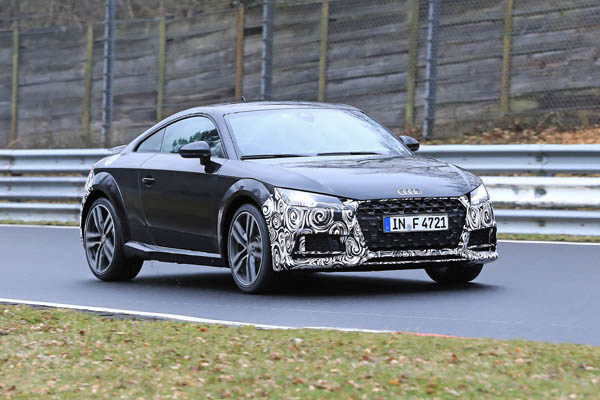 Since its debut in 1998, Audi TT has been one of Audi’s most beloved models and the model retains the interest of its customers despite the troubles experienced by the specialized sports car market. TT has already reached its third generation and now is a facelift mid-life model, which will have to fight the Alpine A110 and the next BMW Z4.

The prototype shot in the northern Arc of Nurburgring is very close to the serial version, and the Audi camouflage shows where the changes will be. These are new bumpers – front and rear, as well as a new radiator grille similar to the R8 supercar.

Paparazzi are supposed to capture the future S-version of TT in the Green Hell, suggesting the aggressive forms of the bumper and wider fenders.

The latest change in Audi’s design philosophy dates back to 2014, when Mark Licht led the design team and the new A8 and A7 emerged as a result of the reform. The new, “more emotional” design should also appear with the freshened TT.

With the facelift in the range of bikes, there will be no changes, with the service being the 4-cylinder turbo-powered gasoline and diesel.