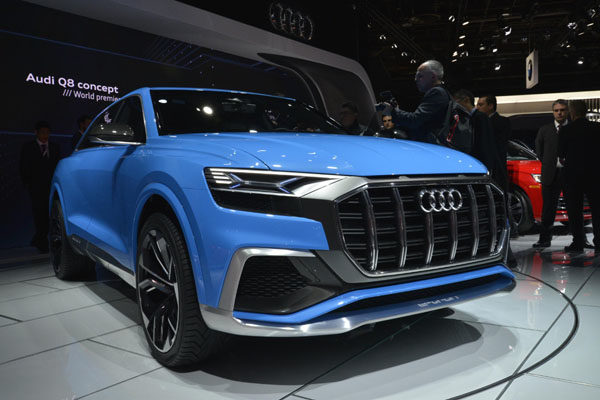 Even at the Geneva Motor Show in March, an Audi concept could emerge to show how the more powerful version of the Q8 will look. This is what Autocar magazine reported, suggesting that the traditionally German version will be called RS Q8.

The Audi Q8 concept debuted in Detroit and the company promises that the RS version will not be so extravagant but it will be more aggressive. It is assumed that the RS Q8 will receive a 4-liter V8 engine with two turbines, which is used in the S8 plus sedan and will most likely also appear with Lamborghini Urus. It is expected that the transmission will be a 8-speed automatic.

Even in Geneva, we will see a permanent four-wheel drive concept – yet it’s an excellent opportunity to remind you of the Quattro system. The central differential will be Torsen type, and the torque distribution will be vector.

The weight of the big SUV will be over 2 tons but its maximum speed is expected to be nearly 300 km/h and the acceleration from 0 to 100 km/h will be less than 5 seconds. It is almost certain that the design of the RS Q8 interior will be quite different from that of the Q8, as well as the wheels that will feature the concept.