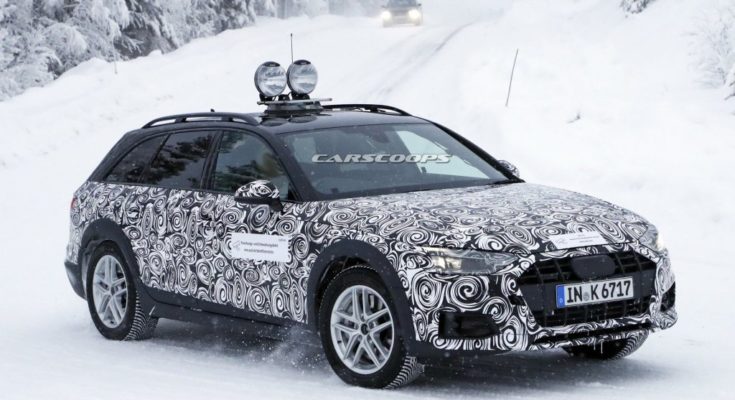 The second-generation A4 Allroad is about to get a much more modern outlook, judging by the latest spy photos. Visually, it will feature new headlamps and rear lights, a wider Q8-like grille and a modified bumper to help him fight the Volvo V60 Cross Country. Audi will apply the same changes to the A4 Allroad as well as the sedan and wagon models, which will ultimately get a facelift in the middle of the cycle, not just a model year update.

This should lead to a more technological vehicle than its predecessor. At the same time, changes such as the wider grille or new headlamps should bring new life into the car.

Like the sedan and the Avant, Allroad will also get a metal strip that unifies the tail lights all the way. We suppose it will be metallic because it looks a bit too thin to be an LED strip.

We can conclude that the new front bumper looks less sporty than before, but the end result should not be disappointing.

Considering that the German manufacturer will display a brand-new Audi Q7 facelift with the latest technology, we suspect that the same will happen with the whole range of A4, regardless of the shape of the body. This means the model will have decent arguments, standing up against the new 3-Series or the Volvo S60.

Changes should include better software, new materials, and perhaps some new safety and connectivity features.

As far as the range of engines is concerned, there is no official information yet. Audi A4 Allroad will be released later this year.